You are here: Home1 / News2 / animal cruelty3 / Investigation after dead puppy found abandoned in a cage

An investigation is underway after a disturbing discovery was made on West Mesa in New Mexico. It was on Monday night when Eli Herrera discovered a lifeless puppy inside of a cage that was dumped off of a path that is frequented by off-road bikes and ATVs, reports KRQE News.

What happened to the puppy?

Officials with Bernalillo County Animal Care Services responded to the scene. It is unclear if the puppy had died and was dumped in the cage, or if someone dumped the puppy in the cage while he was still alive. According to officials, the pup appears to have died from Parvo. 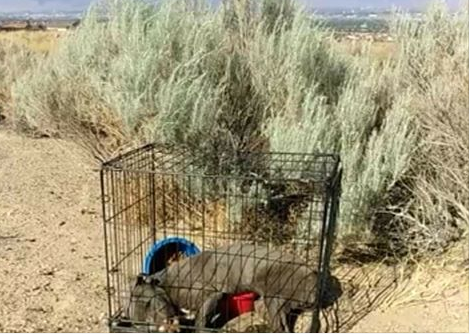 The puppy finder speaks out

Herrera is disgusted about the apparent abandonment. He took a video of the puppy inside of the cage and posted it to Facebook. The expletive laden video is a reflection of Herrera’s disgust – he told the news agency, “I was pretty frustrated obviously on the video I posted. I cuss a little and I apologize for it, but I’ve had dogs my whole life.”

The puppy, an approximately five-month-old pit bull, did not have a collar or microchip. The county is hoping for leads in the cruelty investigation.