Update: Mr. Williams has posted (since the publication of this article) that he may have found a safe place for the dog to go. He is now stating that he never intended to kill any dogs – he was just “ticked off” by people who were offering free advice.

A man, who is an evangelist at the Oak Hill Christian Church in Corinth, Mississippi, is sparking a great deal of outrage on social media today. Facebook user Frank Williams has been engaging people on the social media site about stray dogs who showed up on his property…and his plans to get rid of them.

A Facebook user by the name of Amber wrote:

Well local Corinth folks, Mr. Frank Williams has made it public that the two dogs at his residence that showed up will be put down by the end of the day. He said he “won’t spend money to get a dog gone”, and he said he isn’t dumping them. So I’m assuming a bullet doesn’t cost him much. Could we help this super classy gentleman out with these two dogs since our animal control won’t do their job?

Amber uploaded screenshots of messages that she has apparently engaged Mr. Williams in – in one message, she advises the man that there is a $1000 fine for dumping dogs in the state. Mr. Williams’ response, “Who said I was dumping dogs? They will be put down.” 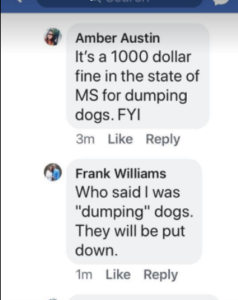 On the Facebook thread tied to Amber’s post, one commenter added a link to Mr. Williams’ public posts about the situation. Though multiple people have criticized his alleged plans to kill the dogs today, he apparently have no qualms about his intentions.

When one woman stated, “All life is precious and killing is killing especially when you have humane alternatives.” Mr. Williams noted that he is not afraid of his plans being made public, “I am not going to bullied by an idiot…make me famous…I am already famous…I belong to King Jesus… share away….” 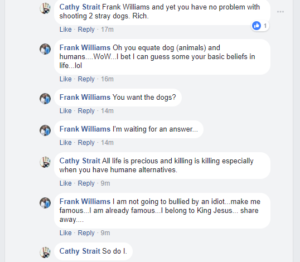 It would appear that the self-reported man of God would rather shoot dogs in need, than take them to a shelter…because he does not want to pay money to surrender them. 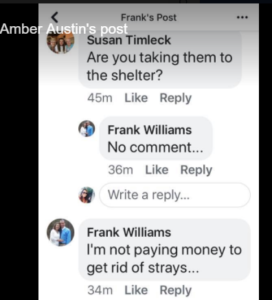 A link to the Facebook page for the church where Mr. Williams is listed as the “preaching minister,” is currently down. It is unclear if it was unpublished in response to the current Facebook dialog between Mr. Williams and animal lovers, or not.

Perhaps people living in the area can reach out to Mr. Williams with alternative options…such as pointing him to a reputable rescue group.

Story idea? Please email Eims1@live.com for consideration
Next: Man accused of throwing dog to its death had been arrested 40 times
Recently in the news: K9 partner of fallen police officer heartbroken by loss

Starla was ‘given away for free’ because she couldn’t wal...
Scroll to top