You are here: Home1 / News2 / animal cruelty3 / Couple charged for torturing dog to death – the sad tale of R...

A Kentucky couple is facing charges for allegedly torturing their young dog, Wolfie, to death. The young shepherd mix, not quite a year of age, was taken in by the Arrow Fund for emergency care, but he died on Wednesday.

The sad tale of Wolfie

When Wolfie was taken from Barry Jensen and Meghan Sturgill of Letcher County, he was emaciated and unresponsive. His gums were white from severe anemia and he was horribly dehydrated and emaciated. Though veterinarians worked to save his life, he could not overcome the severe neglect which ruined his young body.

Shortly after Wolfie passed away, the Arrow Fund wrote:

Our hearts are completely broken. He fought so hard , but his little body had been so damaged from horrendous neglect.
He was surrounded by love for most likely the first time in his life . We are completely heartbroken and emotionally depleted . We had so hoped he would pull through . 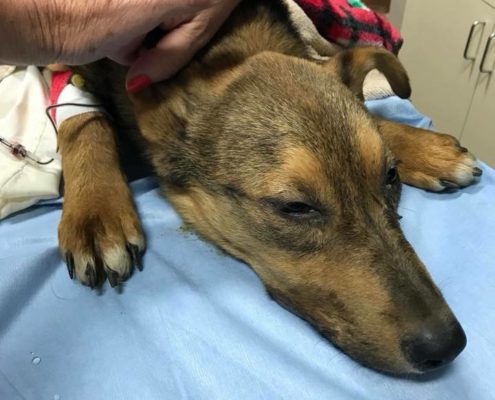 The Arrow Fund had chronicled Wolfie’s fight to survive, but expressed doubt that he could overcome the extreme neglect which robbed him of his health.

Four other dogs, found crammed into a 6′ x 6′ cage, without food or water, were also seized and taken to the Kentucky River Regional Animal Shelter. Their owners are now facing charges for torturing a dog resulting in death and three counts of second-degree cruelty to animals, reported WYMT News.