You are here: Home1 / News2 / animal cruelty3 / Authorities search for people who hit dog and laughed about it

Authorities in Orange County, South Carolina, are searching for people accused of hitting a dog who was being walked by a woman last Friday. According to Live 5 News, a car full of people struck the dog, who was being walked along Training Road in Eutawville, and proceeded to laugh about what happened.

What happened before the car hit the dog?

Deputies with the Orangeburg County Sheriff’s Office were told by the victim, who fosters homeless pets for the Orangeburg County Animal Control, that a gold colored vehicle, possibly a Buick, ran over one of four dogs that she was walking on Friday evening. The victim told the authorities that she tried to get out of the way but ended up dropping the dogs’ leashes just before the car hit one of the dogs, described as a Jack Russell terrier mix. The victim observed the car running over the back portion of the small dog. When the victim confronted the people in the car, the allegedly laughed at her and then drove away.

The dog struck by the car

The dog struck by the vehicle required veterinary care – the extent of the dog’s injuries was not released. The victim has described the people in the vehicle as four black males – one of the men had “long dreads.” The vehicle had plates from South Carolina with tag numbers 5426KQ. 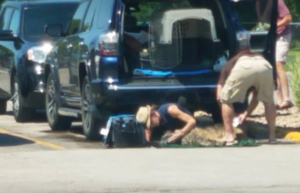 Woman’s Labrador retriever shot and killed by officer after escaping from...

Dog with broken jaw waited by parked car until a kind couple offered to hel...
Scroll to top