You are here: Home1 / News2 / animal cruelty3 / Couple’s dog died in back of SUV while they visited nearby sports... 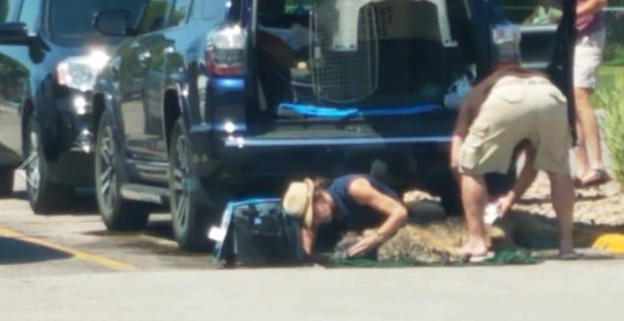 A dog who was left in a crate, inside of an SUV parked outside of an Omaha sports bar, died on Sunday. The German shepherd’s owners left the air-conditioning running for their pet, but the heat proved to be too much to survive.

The dog’s crate was left in the rear of the SUV – it appears that there was not enough cool air circulating to keep the dog alive, reports the Omaha World Herald. Mark Langan, with the Nebraska Humane Society, told the news agency, “This is a good example … in extreme heat, when it’s very warm and humid, that leaving air conditioning running in a car, in this situation, did not provide enough ventilation for the dog.”

What could have been done instead?

On the day that the dog died, the temperature climbed to 87 degrees – the couple was dining with friends at DJ’s Dugout, where dogs are allowed on the patio. Evelyn Birkel, a server at the sports bar, said, “If people want to bring their dogs to our patio, they are welcome to do so, so that we can avoid situations like this,” she added, “We’ve brought bowls of water out for dogs, we are more than happy to do that.”

Public photos were posted to Facebook showing the couple’s dog on the ground. A post accompanying the image states:

We are all outraged but I never intended for anyone to threaten anyone else. If we all take anything away from this, let it be that it is never ok to leave a pet (or a child) in a car on a hot day even with the ac running. Share that information with everyone. Let’s move forward and be more aware of our surroundings. Pay attention to the cars in the parking lot, the houses you walk by. Don’t be afraid to step in before tragedy strikes. Let’s quit looking the other way. Practice empathy not apathy.

He sat in a bar for 3 hours while his precious furbaby died in his locked car. This happened in Omaha today at 114 and Dodge. It was 86 outside.

According to the authorities, no charges are expected because the couple “took precautions” to protect the dog from the heat. The animal control officer who responded to the scene did not think that a citation would serve any purpose.

Believe in miracles? Search for ‘mama’ and her puppies in deserted...
Scroll to top