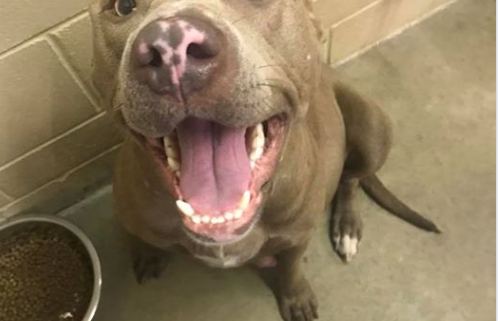 Animal lovers are outraged that a laboring dog, who had just delivered her puppies, was put down at a Texas animal control facility. The dog, referred to as “G7,” went into labor at the Amarillo Animal Management and Welfare.

A shelter volunteer named Dacia recounted what she saw in a public Facebook post that has been shared over 3,000 times in the past 24 hours:

On Thursday, May 10th, while helping an Amarillo-Panhandle Humane Society employee complete a walk through of the facility, I came across an obviously pregnant pit bull in G7. I went into her kennel to take a picture for the APHS Facebook “In the Facility” album. She was friendly, but scared, and jumped up on me for comfort.

I noticed that G7 was in labor and had given birth to a single puppy. She had no whelping box and was laying on the concrete. I immediately went to Amarillo Management and Welfare’s main office area to alert someone. I spoke with a gentleman who directed me to tell Mr. Havens (AMW director). Mr. Havens told me to find Christy (the assistant director).

I happened to pass another AMW employee on the way and asked if they had seen Christy, as G7 was in labor with no whelping box. They acknowledged and took control of the situation. I then saw an AMW kennel attendant assembling a whelping box and assumed it was being handled.

A bit later, I heard that a message had been sent stating G7 was euthanized. She was in labor, and euthanized. An AMW employee later confirmed that it was indeed the same dog.

I feel that this action is the exact opposite of a what “the most humane community in the Panhandle of Texas” would do. This act was horrific to say the least. If this is acceptable to the leadership of the shelter, then what is out of bounds?

Why was the dog euthanized while in labor?

It is hard to fathom putting down a laboring dog, but the animal control agency has an explanation for the euthanasia. Animal Management & Welfare director Richard Havens told the Amarillo Pioneer that the dog was surrendered by her family one day earlier and the owner stated that she was aggressive.

Havens explained, “She went into labor and we made the decision to euthanize. She was not a candidate for adoption or to be placed into a foster program, due to her aggression.”

It is heart-wrenching to know that a laboring mother was killed, as were her newborn puppies. Tragically, there is only so much room at animal control agencies, and for dogs labeled as “aggressive,” the options are few.

The Amarillo-Panhandle Humane Society is a separate entity. They handle adoptions and rescue, but they do not perform euthanasia. The shelter released a statement via Facebook about the incident on Friday:

“The Amarillo-Panhandle Humane Society in no way condones the euthanization of any animal while giving birth. Please understand that APHS and Amarillo Animal Management & Welfare are two separate organizations. AAM&W is city funded. It is responsible for the intake of all animals that come into the animal shelter. AAM&W also has the sole responsibility for euthanization.”