You are here: Home1 / News2 / Adoptable dogs3 / Alone, unnoticed and forgotten – dog has been sheltered for over... 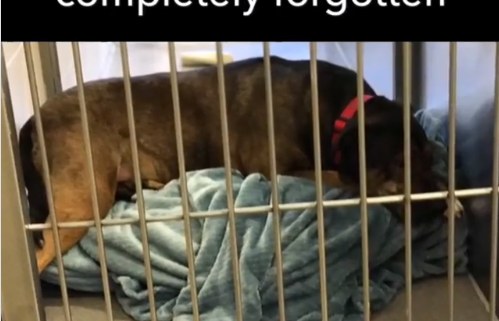 Imagine being invisible to the world – imagine wanting nothing more than a home and being denied. Imagine being forgotten behind bars for 23 hours each day…for years. This is the sad reality for a dog named Brody who has been sheltered at New York’s Babylon Animal Shelter since June of 2015 – after so much time, Brody holds the unfortunate title of being the shelter’s longest resident.

Advocating for this forgotten dog

In October, the Facebook page for Paws Give Me Purpose, issued a plea on Brody’s behalf:

It seems no matter how many Shelter Spotlights, posts, and shares, he still remains a forgotten soul sitting in a shelter far too long. He goes unnoticed in his kennel 23 hours a day, hoping and praying that someone will come and take him home. What is it going to take to get this boy noticed? Won’t someone please give him a chance?

Brody is a looker, a tall, handsome, slim, muscular Rhodesian Ridgeback/Rottweiler mix with a beautiful brindle coat. He is approximately 6-7 years young and has the build and athleticism to run a marathon — Brody can run like the wind!

Somewhere out there is the perfect home for this forgotten dog. According to those who know him, he would do best in a house where he will receive training and regular exercise. Brody is described as a dog who bonds strongly to his person and who would thrive in a home without other pets.

A tall order, but isn’t it time for him to enjoy a real life? A life as a companion and not a homeless shelter dog? Please help make Brody’s dream of being someone’s friend a reality by networking on his behalf.

Dog rescued from years in ‘hell’
Scroll to top