You are here: Home1 / News2 / animal cruelty3 / Dog rescued from years in ‘hell’

For over two years, a senior dog lived in a virtual hell at his home in Pennsylvania. According to Speranza Animal Rescue, the dog had been living in a small pen, which was piled high with feces. The rescue group said, “He had no proper shelter. No blankets or straw to lay on. And, he had lived in this hell for over 2 years.” 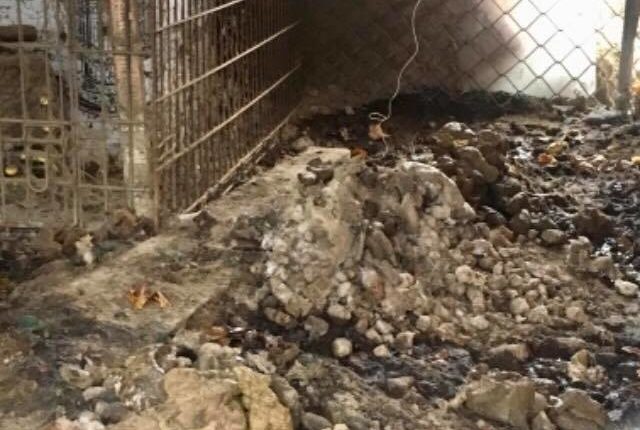 The rescue group reached out to the Pennsylvania State Police as soon as they were alerted to the horrifying situation. The group said, “They were getting him out of there. Whether a search warrant was needed or if the owner surrendered: he was getting out. I met the state troopers at the rescue. When they opened their vehicle all I smelled was the stench coming from the crate with the dog inside.”

The dog was grateful to be rescued. Speranza Animal Rescue wrote:

I was greeted with a tail wag, and a frosty face. And his eyes. They were so kind. But looked so tired.

The dog, dubbed Old Man Tate, is safe now – his body, which is covered in infected pressure sores, will be treated and he will no longer live in filth and misery.

Does anyone care about a 16-year-old dog without a home?

Alone, unnoticed and forgotten – dog has been sheltered for over 3 ye...