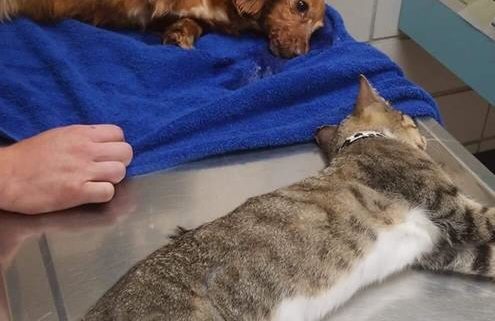 An 11-year-old boy in Iowa is accused of a heinous act of cruelty which claimed the life of three pets. According to multiple sources, two dogs and a cat perished after being injected with insulin – the killings are believed to be intentional.

The tragic situation unfolded at a home in Marshall County on July 12. The boy’s mother called 911 to report that her son was behaving “erratically” and when deputies responded to the residence they discovered three pets who were barely breathing. Help was requested from Diamond in the Ruff Rescue and the ailing dogs and cat were rushed to a veterinarian for care.

On the day that the pets were found, the rescue group wrote:

While you are sleeping … we are working overtime! Thanks God for our volunteers who step up in the middle of the night! This won’t be cheap but it is what we do! Please consider donating to our cause! Please pray we can save these babies! Thanks to Dr Drager for taking our late night call!

Despite efforts to save the animals, all of them perished. On July 14, the rescue group wrote:

We are saddened to report that Precious.. the last of the three crossed the Rainbow

🌈 Bridge this morning. We did everything possible to save her. Fly high..knowing we will find justice.

The boy accused of killing the animals

The boy accused of killing the dogs and cat is believed to have obtained the insulin from his mother. Charges against the youth are expected reports WYFF4 News.

The heartbreaking visual reminder about the importance of one vaccine

Man accused of dragging his dog behind truck ‘to teach him a lesson&#...
Scroll to top