You are here: Home1 / News2 / animal cruelty3 / Someone dumped a young dog into a business dumpster 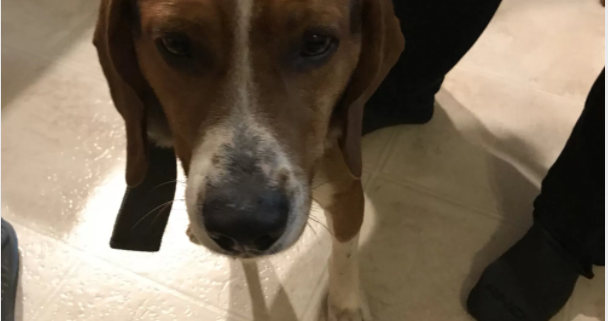 This week, loud whimpering led a good Samaritan to a disturbing discovery in a dumpster behind a Lilburn, Georgia, business. According to the Atlanta Journal-Constitution, the distressed cries from a young dog, identified as a Beagle, led Emily Goldstein’s neighbor and his co-workers to a dumpster on Thursday.

After digging through the garbage, the frightened dog was found. Goldstein told AJC about the danger the discarded dog faced, “He was buried under garbage and today was trash day, so he would have been crushed to death.”

In an attempt to find the dog’s rightful owner, who hopefully had nothing to do with the dog’s abandonment, Goldstein placed an online ad which reads:

Is very sweet loving beagle was found in Lilburn deep in a dumpster. He was whimpering so loud that he drew attention to himself. I decided to make an ad on the off chance that his owner did not do this to him. He’s about a year and a half two years old and is sweet as sugar. 609 902 9282

Goldstein and the man who found the dog are hoping to find somewhere safe for the dog to go if nobody comes forward to claim him as their own. She told AJC, “I would love a happy ending for this baby, nobody deserves to be thrown away like trash.”

Recently in the news: Couple arrested for leaving dog to suffer outside in the cold
Did you know that if you want to get updates from a Facebook page, you have to do more than just “like” it? To get recent postings in your Facebook feed, you must also hover your mouse over the word “following” and then click “see first” from the drop-down menu. You may want to check back with your favorite pages on occasion because Facebook often changes your settings, no longer having your favorites among those to “see first.”

Not fair for Arlington: Pup scheduled to die because ‘not acclimated&...