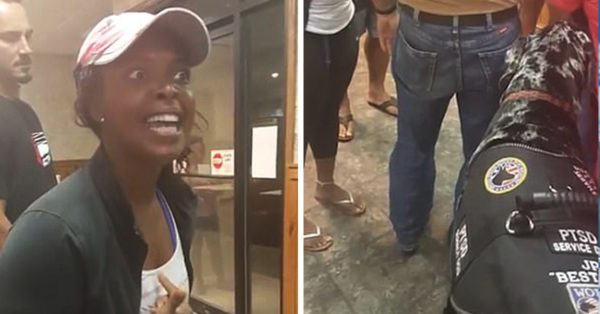 The woman who recorded a woman’s crazed rant about a man’s service dog inside of a restaurant in Delaware has spoken out, and she has stated that the woman’s claim of a reaction to racial slurs is “shameful.” According to TMZ, Sherra Stanley recorded Ciara Miller’s tirade and she is calling BS on Miller’s claim that her over-the-top reaction in Kathy’s Crab House was because of a racial slur that was made to her off camera.

Stanley told TMZ that not only were there no comments made about race, but she was sitting with her friend Bill, an Army National Guard veteran, and his service dog, “JP,” along with other friends and family who are from multiple races. In fact Bill’s own stepdad, who was at the same table, is black – Stanley said that the claim of a racial slur makes “no sense.”

Miller’s outrageous reaction to JP was recorded on video – in it, she said that she was leaving because the “food is nasty and there’s a dog.” She continued to scream about the dog being nasty and insisted that there should be a separate section for people who are accompanied by service dogs.

After Miller was the subject of nationwide backlash for her bizarre behavior, she came up with the “racial slur” explanation, which she felt justified her angry rant.