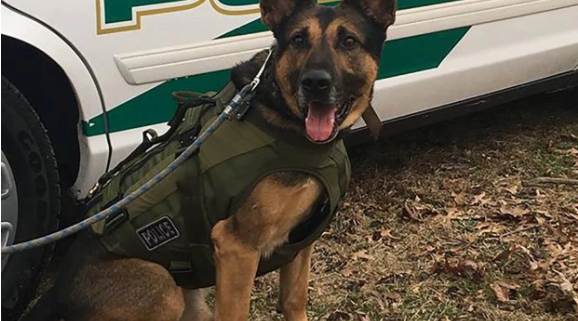 A working K9 with Ohio’s Green Township Police Department died unexpectedly while pursuing suspects wanted for abducting a child. Dino, a seven-year-old German shepherd/Belgian malinois mix, was assisting his handler, Corporal Tony Leidenbor, just before midnight on September 25 when he suffered a “medical event” and collapsed to the ground.

Just after beginning a track for the suspect, Dino collapsed and stopped breathing. He was rushed to Grady Veterinary Hospital .

The veterinary professionals were unable to revive the K9.

According to the New York Post, the police had been in pursuit of armed “masked gunmen” who had stolen a woman’s money and a child before fleeing in an SUV. The men ditched the vehicle after being pursued by officers, leaving the abducted child behind – one suspected was arrested and three more are still being sought.

The Department commented on the impact of this unexpected loss of their K9 “family” member:

Dino has been with the department since 2011 and was very much a part of our police family. He had a reputation as an outstanding police canine and very much loved his work. He will be sorely missed.

Recently in the news: Police officer rushes to rescue puppy tossed out of car on busy road

Owner arrested for allowing his paralyzed dog to suffer in ‘extreme p...