The rather mysterious appearance of Skittles on a rural Wisconsin highway this week has a rather odd explanation about where they were headed. According to the Dodge County Sheriff’s Office, the spilled candy was apparently headed somewhere to be used as feed for cattle.

After the Skittles appeared on the road, the Sheriff’s Office updated Facebook followers about the strange discovery:

At 8:51 p.m. on Tuesday night, the Dodge County Sheriff’s Office came across unusual items that were left in the road. Hundreds of thousands of Skittles were spilled on County Highway S near Blackbird Road. It is unclear who may have spilled the skittles on the road. The Dodge County Highway Department was asked to clean them off the road.
While we don’t know who did this, it is certainly clear that it may be difficult to “Taste the Rainbow” in it’s entirety with one color that likely fell off the truck! 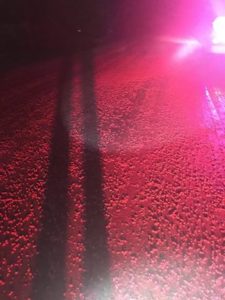 The authorities later offered up the odd explanation:

According to NBC News, Mars Inc. has stated they it is unclear why the Skittles would have been intended to be used as cattle feed, and that the spilled candy came from a plant in Yorkville, Illinois, that doesn’t sell unused product for animal food. The lack of an “S” on the candy is blamed on a power failure at the plant.

Suffice to say, the sheriff’s office post about the candy being used to feed cattle has created quite the social media stir…people are questioning why cows would be fed candy and “freaking out” over the prospect.