A dog in Roswell, Georgia, has lost his eye after he was apparently attacked by someone who shot a paintball gun at his face. According to WSB-TV, the dog, dubbed “Matty Ice,” (for Matt Ryan of the Atlanta Falcons) was taken under the wing of the non-profit rescue group, Angels Among Us Pet Rescue, after he was found last week by an area animal control officer. 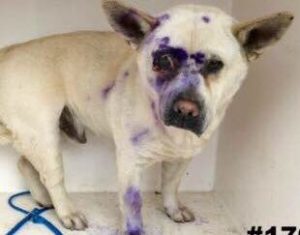 On January 26, the rescue group reached out to its Facebook followers after an animal shelter alerted them that the injured dog was in need of help. Fortunately, in short order, Matty Ice was rescued from the animal control agency and now, the rescue agency is hoping to find him a real family.

On January 26, Angels Among Us updated Facebook fans about Matty Ice’s need for a home:

I was told that I am named after Matt Ryan of the Atlanta Falcons. They say it’s because I am strong, determined, and remain cool even in times of stress. Like my namesake, I have survived some challenges, but I am also a gentleman with a kind heart. I’m a lucky dog, and who knows… one day I’ll be a champion too! #MattyIce #ATLFalcons
Oh, I’m also looking for a family to call my own.

Anyone interested in adopting this resilient dog should visit the rescue group’s website and complete an adoption application. 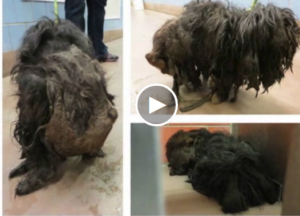 Pounds of matted fur removed from neglected dog – see the transformation at this link.