Disturbing photos of more than 700 dead dogs have animal advocates in Pakistan and around the world condemning Karachi officials for poisoning stray dogs in what has been referred to as a culling operation, reports IndiaToday. 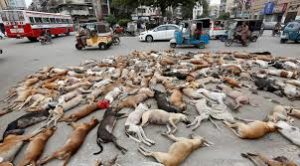 Officials admitted to poisoning the dogs using poison tablets hidden in chicken. For the past few days, stray dogs  in six city districts, estimated to be in the thousands, have been killed. However, an official count was not declared. Municipal workers gathered the bodies and threw them into trucks in preparation for a mass burial. Mass culling of stray dogs also happened in 2015. Following that cull, the bodies of the  dogs were laid out in the hot sun and dumped in a rubbish pile later.

According to RT.com, the outrage continues with social media messages expressing their disgust.

“Just bloody horrible”, “Spread the word. Shame on Karachi authorities!”, “No more cruelty” were just a few among the angry messages.

On Thursday, Aseefa Zardari, the youngest daughter of former Prime Minister of Pakistan Shaheed Benazir Bhutto and former President Asif Ali Zardari spoke out against the heartless and cruel act.

In 2014, Russian officials in Sochi instituted a campaign to exterminate street dogs using poison. The authorities hired a private company to kill as many stray dogs as possible before Winter Olympics despite government claims that had not been the plan. Animal activists from around the world rescued as many dogs as possible – some now living happy lives in the United States.

How can a government not use science to stop the rampant breeding of street dogs? Where are the animal cruelty laws in Karachi for abandoning a pet in the streets? What country hasn’t heard of neuter and spay programs? Where is their humanity? Shameful!

Warning: Video is graphic and disturbing.

Man charged after abandoned dogs found – one dead, one dying Lab missing for five months found in woods not far from home
Scroll to top