It was February 29 when Katee, the doted upon black Labrador retriever was last petted and brushed by her owners, Gail and Jim Kraus of Toms River, New Jersey. On Tuesday, the Lost Dogs in Ocean County Facebook announced Katee had been found and was on her way to be reunited with her family. 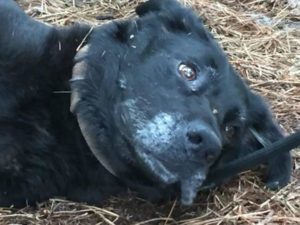 When Katee disappeared, her family posted fliers everywhere, walked and re-walked the areas Katee knew best, but there were never any signs of their much loved  companion. Unbeknownst to Gail and Jim, Katee had survived for months in the woods near a stream where she followed a herd of deer and ate what neighbors had left out for her. A kind couple, Jack and Marian, who live in Holiday City, an adult community in the area, had been feeding the dog – completely unaware who the dog belonged to; Katee only gingerly approached strangers and had no intentions of being caught. 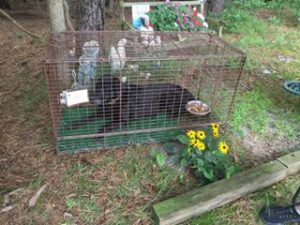 As fate happily closed in for Katee and her family, someone informed Jack and Marian the stray dog they had been feeding matched the photo on a lost dog flier. From there it was the excitement and the shock when Gail and Jim were called that Katee had been found. 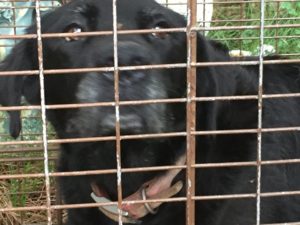 “We picked up Katee’s other owner Jim and, Debbie, Robin, Susan, Jim and myself took Katee to the Toms River Animal Hospital where she was examined and is doing GREAT. She will be staying there over night so she can get cleaned up, get all the ticks removed and get her ear infection taken care of and will be going home in the morning. GREAT work from Susan, Robert, Robin, Debbie, Trish and the others that were out looking and the two home owners Jack & Marian for their dedication and love for animals for bringing home Katee SAFE & SOUND!,” announced the organization’s happy news to their Facebook followers. 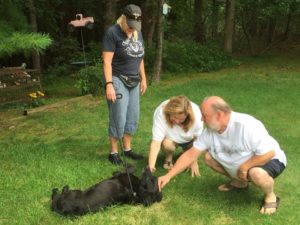 Katee surely has an angel on her shoulder. In addition to having survived the winter on her own, this girl is also a survivor of Hurricane Katrina. How’s that for a happy ending?

Don’t ever give up hope … Katee is a living miracle for all of us.