In the Indian city of Hyderabad, a group of teenagers, some thought to be no more than 14-years-old, shared a horrifying three minute video from their cellphone to social media of them throwing terrified puppies into a lit fire and then using sticks to prevent the helpless little ones from escaping, reports Humane Society International India. 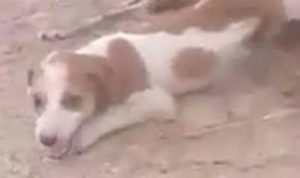 On Tuesday, eight teenagers were arrested for burning three live puppies in the Musheerabad area. The accused were seen in a video they circulated on social media. They carried the three puppies, no more than two months old,  by their hind legs to a graveyard and burned them alive under a pile of dried branches, sticks and jute sacks. The puppies were seen struggling to escape while the culprits pushed them back and laughed as they held the screaming little ones down into the burning fire with poles.

The heart wrenching cries from the puppies lasted for several minutes; tragically showing how the defenseless  pups suffered before succumbing to the horrendous torture.

The arrest was made after Shreya Paropkari, cruelty response manager for HSI/India, and Vasanthi Vadi of People for Animals Hyderabad, met with the commissioner of Hyderabad police and presented the video. Managing director, Nuggehalli Jayasimha has called for “swift and stern action for this inexplicable violence against defenseless puppies.” The teens are expected to appear before a judicial magistrate before being sent to the Juvenile Justice Board, however “Rs 50” was the penalty for animal cruelty in the year 1960 when the law was enacted. Today, however, the value of Rs 50 is negligible. (,75cents U.S. currency)  The Government of India has not  changed the fine or punishment in the last 55 years.

A recent movement called #NoMore50 campaign focuses on revising the penalties for animal cruelty to amounts relevant to this day and age. “It is a tragedy for this country that animal cruelty is not taken as seriously as it should be,” stated Jayasimha, reported the Indian Express.

Humane Society International activist Navamita Mukherjee said she was “shocked,” adding: “It is an indicator of serious anti-social behaviour, including criminal offenses and violence towards women and children.”

Pet Rescue Report has decided not to post the video. (Photo screenshot from HSI India)

2K reward offered for info who set small dog on fire Heartbreaking separation as family cries when forced to leave pets at shelt...
Scroll to top