More animal cruelty reports in  Mumbai, India emerged this week; this time coming out of the posh neighborhood where snooty Mira Road residents of the upscale Sandstone Cooperative Houseing Society  hired a cleaning supervisor to kill 11 newborn puppies,  because the tiny yelps and barks bothered some of the residents, reports DNA India. 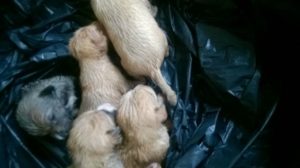 The puppies were gathered together in the pouring rain and packed into a black plastic garbage bag and then thrown into the garbage bin. Had it not been for an animal lover and resident of the building, Shefali Agarwal, who photographed the images of the supervisor identified as Charlie and reported the disgusting act to police, the puppies would have died.

“After going through the CCTV footage, we have registered a case under the relevant sections of the Prevention of Cruelty to Animals Act, 1960 against the chariman, secretary and the housekeeping supervisor of the society,” stated Police Inspector Jagdish Shinde. 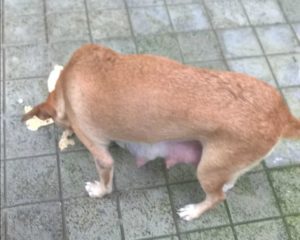 Peace for Animals Welfare Association (PAWA) filed a formal complaint. Fortunately the puppies, who were only a few days old and had not even opened their eyes yet, survived their terrible ordeal, but had been in shock and sick from exposure to the inclement weather. The mother dog was spotted frantically searching for her puppies around the complex, and only ate food she was offered once her puppies were returned.

Just one week ago, in the Indian city of Hyderabad, four stray dogs were tortured in the third incident of egregious animal cruelty in less than two weeks, reported the Indian Express.  A week before that, a group of teenagers shared a horrifying three minute video from their cellphone to social media of them throwing terrified puppies into a lit fire and then using sticks to prevent the helpless little ones from escaping. Eight teenagers, as young as 14 have been arrested and charged with the heinous crime. Another egregious incident involved a medical student throwing a dog off a several story balcony for “fun.”

Woman sentenced to jail time for strangulation death of puppy Sickly, senior shepherd forgotten and in need
Scroll to top