In the Indian city of Hyderabad, four stray dogs were tortured in the third incident of egregious animal cruelty in less than two weeks, reports the Indian Express.  One week ago, a group of teenagers shared a horrifying three minute video from their cellphone to social media of them throwing terrified puppies into a lit fire and then using sticks to prevent the helpless little ones from escaping. Eight teenagers, as young as 14 have been arrested and charged with the heinous crime. A second incident involved a medical student throwing a dog off a several story balcony for “fun.” 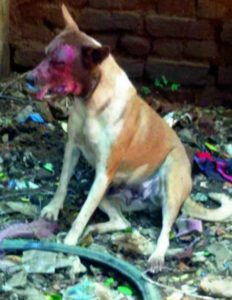 And now, on Wednesday, three dogs in Hyderabad were poisoned and a pregnant dog was attacked with acid; only one dog lived.  Local resident Annamma Joseph had been feeding the dogs regularly when she noticed they approached her crying in pain the evening she returned home. An unknown culprit had thrown acid in the face of the pregnant pup; she did not survive. The other dogs are suspected to have been poisoned and the one survivor is currently in the care of Blue Cross Animal Rescue. A police investigation has been launched; a necropsy of the dogs will determine the exact cause of their deaths.

The Humane Society International has offered a reward for information leading to the arrest and conviction of the person(s) involved in the cruel and heartless attack. In a statement NG Jayasimha, managing director of the HSI, encourages citizens to come forward and help:

“It would only take an ill mind to torture harmless dogs. At least one case of animal cruelty is being reported every week and the way the crime is committed leaves us aghast. This only proves that an immediate increase in penalties against animal cruelty is absolutely necessary. We encourage anyone who has information in this case to come forward. The identity of the informant will be kept confidential. Anyone with leads to the culprits are requested to contact HSI/India at 076749 22044.”