You are here: Home1 / News2 / Wildlife Rescue3 / Rescue underway to save 6 manatees stuck in shallow pond and ditch

In Crystal River, Florida, a mother manatee and her calf were rescued on Wednesday after high waters from Hurricane Hermine left the two stranded in a ditch, reports WeshTv. 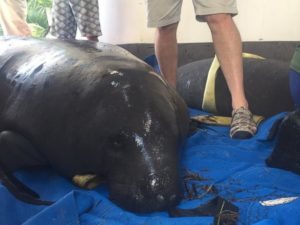 When area residents spotted the two, they called for help, and rescuers were able to use nets to carefully hoist the animals out of the ditch. The Florida Fish and Wildlife Conservation Commission crews transported the two to Kings Bay. 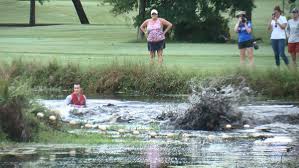 Then there were four more manatees stranded in a pond at the Plantation Golf Course. On Thursday morning, a massive rescue effort to save all of them commenced. Although they had been there for nearly a week, there was more than ample hydrilla in the pond to keep them all well fed.

Fox 13 described the rescue as several volunteers waded into the fresh water pond up to their chests while others sat in kayaks using massive nets to corner the manatees and push them onto the nets.

“They put the nets in strategic positions that, if they go over that, they can trap them that way,” said Mike Walsh, a veterinarian with the University of Florida’s Aquatic Health program. “It’s really a precise situation.”

Once out of the water, the manatees were health checked and released back into the Crystal River. By late afternoon they had all been rescued and slowly swimming back to the bridge area where they had washed over.

(Photos screenshot via AbcNews and FF&WC)