Why would anyone shoot a defenseless puppy in the face with an arrow is what Newark, Ohio authorities want to find out and are asking the public for help identifying the abuser, reports Nbc4News. 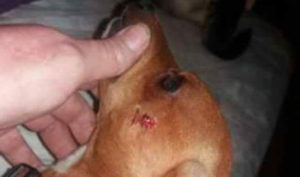 A one-year-old rescue pup named Diego was shot in the face on Sunday night as his owner, David Pyles let the dog out the family’s front door. Moments later he heard the dog yelp, and when Pyles went outside, he saw the arrow lying on the ground next to Diego. Fortunately Diego was only grazed by the arrow and did not need any stitches, but there have been two other reports of pets shot with arrows withing the last five months.

In April, authorities reported a dog and cat were shot with arrows. The dog named Lady had been shot in the face  while in her kennel. Lady survived and was adopted by a Newark police officer. The next day a cat was seen by its owner with an arrow sticking out of her side. The cat ran away and has never been found.