In an upscale Greenville, South Carolina home, a German shepherd is chained in a small area in the garage unable to move more than a few inches in any direction. On Thursday, Carmen’s Rescue was notified by a good Samaritan asking for advice how to help a dog in distress.  The note stated: 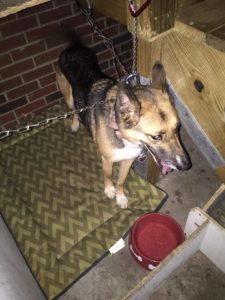 “I don’t know if anything can be done animal control wise or not? This dog is chained up in a garage all day like this; no fan or air conditioner. She cannot move. Only goes outside to use the bathroom then she is back on the chains. Do you have any ideas?
My friend went over to her cousin’s house last night and saw the dog in that situation. She sent me the picture asking for help on what to do. She tried to get them to let her take the dog and they refused. She contacted me about it and was very concerned about the dog. Had no idea they were keeping it like that in the hot garage.”

The dog is tethered by three different chains; one on each side and another chain behind her. According to the witness, the dog is not able to lie down and stands in that position for eight hours a day until her family takes her out for her bathroom relief.

The rescue immediately contacted Animal Control of Greenville County, who promptly responded and sent two officers out to investigate. According to the owner, the dog has had a variety of anxiety issues and suffered a breakdown on the 4th of July. Claiming he took the dog to a Banfield veterinarian, the owner told the officers he was advised to keep his dog “restrained” until the medication started to work.

“That is the story he gave and AC took it hook, line and sinker. AC asked for Mr. **** to provide some sort of statement from the veterinarian and that they will come back on Monday the 11th,” wrote a frustrated Carmen Klapper, founder and president of Carmen’s Rescue on her Facebook page.

Greenville County requires dogs tethered to have at least 12 feet of chain and to be able to move around freely. Although it is possible the dog may need to be restrained, using a crate in an air-conditioned and well ventilated area certainly would qualify as a humane alternative rather that being tied with multiple chains.

Tragically, this dog had been sentenced to three more days of being chained up as animal advocates continued to be outraged at the situation.

“Could the AC officer have not at least said ‘Mr. ***, I understand your predicament but what you are doing is excessive, cruel and illegal; here are some more reasonable alternatives…’ and then check again on Monday to make sure Mr.*** is  compliant?,” asked Carmen. 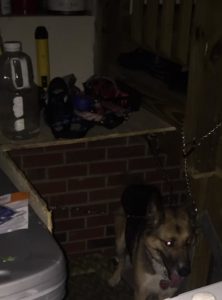 On Saturday afternoon, an email was sent out from Paula Gucker from Greenville County assuring everyone that Animal Control is checking and monitoring the situation. There has been no word if the dog remains in the same situation. Share this dog’s plight; emails expressing concern can be sent to dcampbell@greenvillecounty.org and PGucker@greenvillecounty.org.