In Charleston, South Carolina, the man charged with felony animal cruelty for taping the muzzle of a Staffordshire puppy named Caitlyn, pleaded guilty, reports the Charleston Animal Society on their Facebook page. 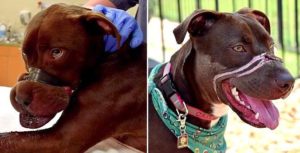 William Leonard Dodson, 42, of Quitman Street in North Charleston, pleaded guilty to the mistreatment of an animal in court on Monday morning and is scheduled to be sentenced at a later date.

“Today’s plea shows progress, but cruelty laws in South Carolina still lag behind the rest of the country and are in great need of improvement,” stated Charleston Animal Society Director of Anti-Cruelty and Outreach Aldwin Roman. “We are committed to working with lawmakers, police and prosecutors to make sure justice is done for all animals who are abused like Caitlyn.” 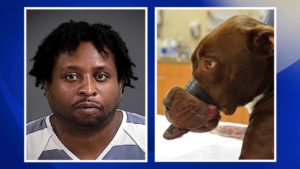 On May 27, 2015, the puppy was found with her muzzle tightly bound with electrical tape; her tongue had turned black from lack of blood circulation. As her story quickly went viral when photos of her swollen face were posted by the Charleston Animal Society, her plight quickly drew attention to the dog’s recovery and the egregious nature of animal cruelty crimes.

“It’s important to remember that a number of studies have drawn a link between the abuse of animals and violence against people. We need to all find solutions to stop this cycle,” reiterated the organization’s director of community engagement, Kay Hyman.

Caitlyn continues to recover from the stress and anxiety of her past, but lives with a foster family under the guidance of the Charleston Animal Society.

“Our number one priority is Caitlyn’s health and well-being and we are attending to special needs she has and will continue to do so,” said Charleston Animal Society CEO Joe Elmore.