In Orange County, Florida, two missing dogs were found this week after they vanished when a 14-year-old boy stole a woman’s car with the dogs inside, reports the Orlando Sentinel. 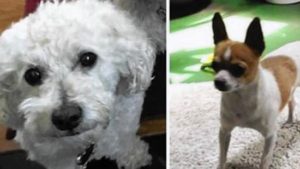 According to the Orange County Sheriff’s Office, “Chico” the Chihuahua and “Frankie Rey,” the white Poodle-mix, were reunited with their owner Eileen Pagan. The woman, who had just moved into the area, had been at a gas station when Deon Sykes, 14  approached her and asked her for a ride home. No sooner had Pagan left driving from the service station, when Sykes is alleged to have assaulted her using pepper spray to force her out of the car. Pagan was treated at the hospital and released the following day.

The teen suspect was found less than an hour later, but would not give authorities any information about the location of the dogs. As an out pouring of community support flooded the area searching for the dogs, they were finally spotted along Fudge road – three miles from the service station.