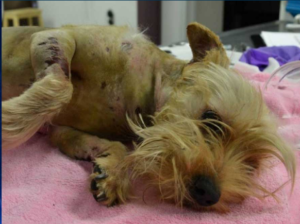 On Thursday, the Washington Animal Rescue League made an announcement about the sentencing of a man who was convicted for lighting a puppy on fire in 2014. The abuser, Brian Davis, has been sentenced to seven months in jail for a felony animal cruelty charge resulting from burning the Yorkshire terrier puppy named “Andy.”

Andy, who was nine-months-old at the time of the September 2014 incident, was discovered with severe injuries on his abdomen, chest, ears, legs, and tail. The wounds ultimately proved to be fatal – the pup died despite receiving veterinary treatment. Washington Humane Society Humane Law Enforcement (HLE) Officer Nick Lippincott said at the time, ” This is one of the most severely injured animals I have witnessed in my career, due to blatant cruelty.”

Following Davis’ sentencing, HLE Officer Dan D’Eramo, who worked on the case, said, “The charges were initially ‘destruction of property’ and ‘arson’ but the U.S. Attorney’s Office was able to amend them to felony cruelty to animals midway through the case. Without the relationship we have with MPD, Davis probably wouldn’t have served any time.”