A nine-year-old male Dalmatian named Poochie has been at Downey Animal Care Center since June 11. 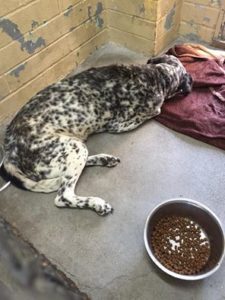 He is listed as available for adoption to the general public on July 12. Sadly, when a rescue organization recently arrived to help Poochie, he became fearful as he was being led into the car, and therefore the organization decided not to take him; from the parking lot Poochie was walked back into the shelter.

A Facebook page to help share Poochie’s plight can be found here. Advocates who have met and interacted with Poochie describe him as an older dog-most likely suffering from arthritis and in pain.  Shelter volunteer Sal Valapena stated,

“I worked with him and he’s so sweet. He’s big so I can only imagine the pain he was in.”

Scroll down to watch Poochie’s video as a volunteer scratches the dog behind his ears. Advocates continue to pledge funds for this dog available to an approved rescue organization. Share Poochie’s plight with friends, family and social media contacts. How tragic to look at his picture here and see how he has given up. Every life is worth saving; please help Poochie by sharing his story.