In Lancaster, Pennsylvania, no charges will be filed against a puppy mill breeder in connection to the rescue of a four-month-old puppy discovered by Speranza Animal Rescue on the 4th of July, reports the Lancaster County Society for the Prevention of Cruelty to Animals in a news release. 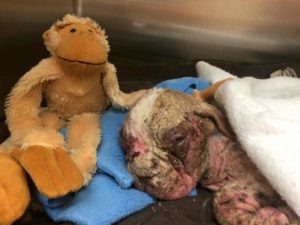 According to AbcNews, SPCA director Susan Martin said it cannot be proven beyond a reasonable doubt that the breeder neglected care or had  intentionally set out to harm the Boston terrier pup born on the farm. At the time the dog was sold, he had been properly vaccinated and was deemed healthy. Two weeks later, the new owners returned  the puppy with a severe case of demodectic mange. The breeder stated he immediately consulted with a veterinarian, but the pup had not been responding to care. One day before the puppy, dubbed Libre had been surrendered to the rescue group, the breeder stated the dog had taken a turn for the worse.

Along with the puppy, the breeder surrendered the puppy’s mother, who is currently in the care of the SPCA for the beginning stages of mange. She will be placed for adoption when she recuperates. Libre continues to be treated by the Dillsburg Veterinarian Hospital where he is being monitored 24/7. The dedicated volunteers of Speranza Animal Rescue and the staff at the veterinary hospital continue to care for the puppy who has touched everyone’s heart.

Donations for Libre’s veterinarian care can be made by clicking here.