You are here: Home1 / News2 / Dogs3 / dog news4 / Heartbreaking photo of loyal Cocker Spaniel who stood by his owner’s...
Spread the love
Tweet

A little blond Cocker Spaniel stood loyalty at the side of his owner’s casket and repeatedly pawed at the coffin in the gymnasium in Ascoli Piceno not understanding why his human couldn’t respond, reports the Telegraph. 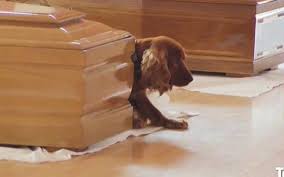 The heartbreaking photo of the dog named Flash was captured in the village of Pescara del Tronto where the dog’s owner, Andrea Cossu, 45, had been on vacation when the hotel collapsed during the earthquake. The entire village was reduced to rubble and dust; a sad testament to the loss of so many lives.  The little dog rested silently next to the wooden coffin, and his gaze remained steadily fixed in front of him as he loyally guarded his master before the mass funeral services began.

Cossu’s funeral was held on Friday in Pomezia, the town south of Rome where he lived. Neighbors and friends said the two were inseparable. Flash will be now be cared for by Cossu’s wife who survived the earthquake that killed 290 people.