You are here: Home1 / News2 / Dogs3 / dog abuse4 / German shepherd chews off his foot to escape from tangled tether
Spread the love
Tweet

An eight-year-old German shepherd chewed off his own foot trying to free himself from a tether that had been painfully twisting his leg for an extended period of times, reports WcvbNews and the Massachusetts Society for the Prevention of Cruelty to Animals-Angell Memorial on Monday. 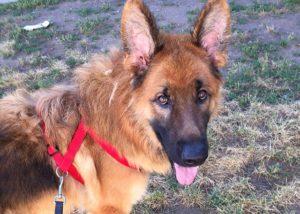 The emaciated long-haired shepherd named Maverick was seized on July 12 by Officer Chelsea Weiand after Middleboro Animal Control in Massachusetts, found the dog and rushed  him to an emergency veterinarian clinic for immediate help. Veterinarians discovered a severe wound to the dog’s right rear foot.

Maverick’s previous owner, Kevin Kennedy of Middleboro faces one county of felony animal cruelty for neglect and failing to provide necessary veterinary care. The dog’s other legs were also  covered in rope burns and scars that had healed over in the past.

Because of Maverick’s chronic pelvic dysplasia, veterinarians fear he would not be able to walk if his leg were amputated as would be normal procedure for this kind of injury. Instead a different technique will work to reconstruct his foot by moving what remains of the dog’s foot pad and positioning it over the weight bearing part of his foot. Surgery is scheduled for later this week; his recovery will take up to two weeks when he will be ready to be adopted to a loving home. Surgery is expected to cost more than $5,000. Help for this deserving pooch can be directed here.