You are here: Home1 / News2 / Dogs3 / dog abuse4 / Puppies found tarred to a road in Romania
Spread the love
Tweet

Four defenseless puppies were found in a northeastern Romania city covered in hot tar and left in the sun to die along a country road, reports the Daily Mail. 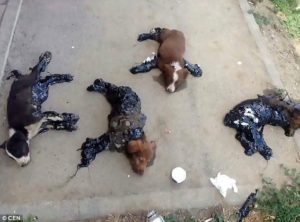 It is now feared an unknown culprit has been intentionally torturing dogs; two more puppies were found  under similar circumstances less than two months ago under similar circumstances. The puppies, dubbed Ava and Ada had been abandoned lying on a piece of cardboard. They were rescued by the Sky Foundation for Animal Rights. During the previous incident, it was disheartening to hear a police officer tell the rescuers he had no intention of “wasting his time” investigating the crime.

In this latest case, veterinarian Sorin Puiu was able to anesthetize the puppies and clean them up. 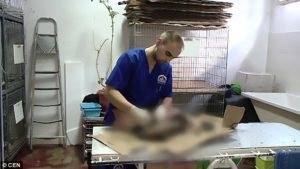 Although still listed in serious condition, the pups are expected to survive and will be available for adoption when they are well.

Information about the Sky Foundation can be found here.

(Photos screenshots via the Daily Mail)