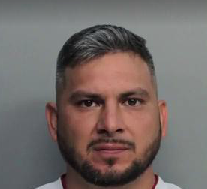 A south Florida man is accused of shooting two of his neighbor’s dogs – both dogs died from their injuries, reported Monday’s WSVN News. The troubling situation took place on Sunday morning – according to the Miami-Dade Police, a family woke up to the sound of gunshots and found their two dogs, a German shepherd and a pit bull, with fatal injuries.

The dogs belonged to a military veteran who suffers from post traumatic stress disorder, and his wife, who has battled stage 3 breast cancer – the couple, Antonio and Yamilla Frederick, stated that their dogs had helped them cope with their issues. Antonio told WSVN News, “She would help me with sleeping, when I was depressed and whatnot. She would come and put her paw on me, put a lick on me.”

The neighbor accused of shooting the dogs, identified as Jose Rocha, was arrested shortly after the shooting. Rocha is facing animal cruelty charges. Rocha told the authorities that he was merely trying to scare the dogs – not kill them. Rocha has already bonded out of jail.