Someone driving a white van stopped briefly in front of the automotive supply store Omaha Automation in Detroit on Wednesday and pushed a dog out onto the side of the street before taking off, reports WxyzNews. 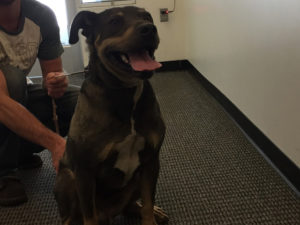 Surveillance video captured the scene as the dog tried desperately to run after the fleeing vehicle. When employees from the store noticed the heartbreaking situation, they rushed out to rescue the dog and brought him back to the safety of the store- trying their best to reassure the frightened, good natured pooch. The animal lovers named him Buster. The vice president of the store, Scott Muschong can’t understand why Buster’s owner didn’t think enough of his dog to at least surrender him for adoption.

“Even when it was here, it was kind of walking around wondering what was happening. It was getting a lot of love and attention inside so I think that eased the discomfort maybe it had, but it is heartbreaking. It’s very heartbreaking to see that.”

Buster was turned over to the Michigan Anti Cruelty Society where the dog was deemed healthy and well-cared for by his unknown owner. It is hoped someone will recognize Buster and/or the white van. It is a crime to abandon an animal.

Once Buster is evaluated, he will be eligible for adoption. Follow the National Pet Rescue on Facebook.

The surveillance video can be viewed here. (Photo via screenshot WxyzNews)