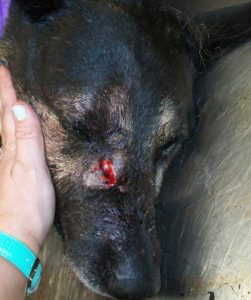 Francisco Flores, 32, Hector Mendoza, 25, and Luis Mendoza, 26, had allegedly chained the dog named Smokey and had been taking turns beating him. Authorities had been responding to a drunk and disorderly call from a neighbor when they found the three men in their apartment covered in blood. In the bathroom was Smokey; one of the men had a knife and stabbed the dog, while the other man poked Smokey with a stick. The Greene County Humane Society was called to rescue Smokey, and while waiting for help to arrive for the dog, the sheriff’s deputies softly comforted the injured and frightened dog. The police report stated:

“When they opened the bedroom door, the three men turned toward them and a shepherd- to medium-size dog came running from the bathtub. The dog had several cuts and punctures about its body. One of the males was holding a bloody knife and the other was holding a long wooden stick, both being stained with blood.”

The dog had escaped from his own home earlier in the evening because of his fear of thunderstorms. He came in contact with the men after jumping over the fence in his backyard.  His owner, Elaine Darnell had been searching frantically for her dog, and didn’t realize what had happened to Smokey until she spotted her dog’s picture on the Facebook page of the sheriff’s department.

The men were being held in lieu of $7,000 bond in the Greene County Detention Center. No one knows  the motive for such a despicable act of animal cruelty. Smokey underwent hours of surgery to his face, neck and body, but is expected to recover. He was reunited with his family on Monday. To make a donation towards the dog’s care, please click here.

15-year-old Labrador retriever surrendered when her family could no longer afford... Dog tossed out of van along Detroit street rescued by Good Samaritans
Scroll to top