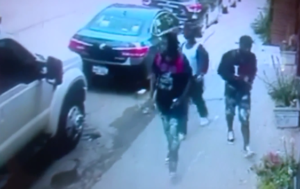 Four men in Chicago, Illinois, unwittingly spared a dog from death inside of a parked truck. According to Thursday’s AOL News, on Monday, the men walked by a parked truck on the 1300 block of W Erie St. and then came back to break out a window…while their intent had nothing to do with sparing the life of the German shepherd inside, their actions likely saved his life.

Surveillance cameras captured the incident – the men did a smash and grab, taking off with a laptop which had been inside of the truck. The dog was in the backseat, hidden from view by dark, tinted windows.  Declan Morgan, owner of the Irish Nobleman Pub, told AOL News: 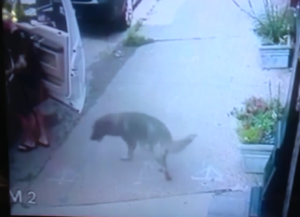 Thanks to the same surveillance cameras which captured the truck break-in, it was possible to see how long the German shepherd had been sitting inside of the hot vehicle…20 minutes before the window was shattered and another 40 minutes until the owner returned to the truck.

In this particular story, score one for the bad guys.

(Photos/screenshots of surveillance video via AOL.com)

Dog locked in closet in kennel 30 pounds underweight: Search on for owner