It was a heartbreaking photo that went viral when it was posted by Rescue Dogs Rock NYC nearly two months ago. Simon, the dog pictured on the right had been recovering from mange, while the dog on the table named Sammie had been maliciously spray painted, shot and then dragged by a car. Jackie O’Sullivan, co-founder of the rescue organization wrote: 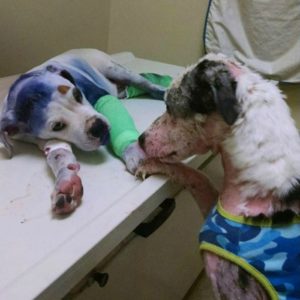 “Here is Simon our mange pup comforting Sammie our newest critical case. They both were saved from different shelters in South Carolina and are both being treated at our vet partner there. Last night Simon came in to check on Sammie and see how he was feeling…. Sammie accepted Simon’s soft touch and was grateful for the love and affection that Simon showed him. Right now Sammie is fighting for his life and in surgery to try and save his 2 broken legs and the danger of infection setting into the bone as Sammie’s injuries are at least 4 to 5 days old which is very concerning.”

Sammie stole the hearts of adults and children all over the world; many well-wishers and animal advocates sent him presents cheering on his recovery. Both dogs were transported up north, and it wasn’t long before Simon found his incredible home. Because of the seriousness of Sammie’s condition, he did not arrive in New York until later. 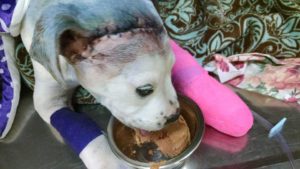 Although the blue spray paint has long been shampooed away, and the bullet wound to his head has healed, his surgeries to repair his back leg has been extremely complicated.

“Unfortunately, due to being a puppy and all the duress on his little body and the trauma of the back leg, intense stress was put on his injured front leg which impacted the growth plate and has caused the leg to bend and go out to the side as you can see in this first photo.” 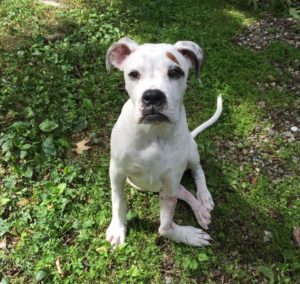 Sadly Sammie’s front leg is causing him a lot of pain and will be undergoing a third orthopedic surgery on Tuesday at a specialty hospital by a board certified surgeon. While he should be outdoors running and playing like other puppies, Sammie has another hurdle to overcome.

Sammie thanks you for not giving up on him.