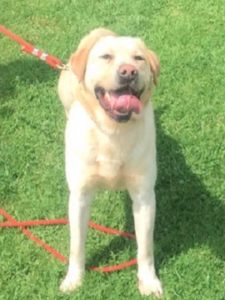 A yellow Labrador retriever, who worked as a drug-sniffing canine for the Pennsylvania Department of Corrections,  died after being forgotten inside of a parked vehicle. According to Tuesday’s publication of Penn Live, the two-year-old dog, named “Totti,” had been participating in a training exercise in Rockview on Thursday, July 7, when the tragedy occurred.

Totti was forgotten inside of the parked vehicle for approximately two hours before his handler realized that he was inside of the car, reported WJACTV. Susan McNaughton, press secretary for the state Department of Corrections, commented on the tragedy in a news release, “When the handler realized this fact, he and others rushed to the vehicle and began emergency care of the dog, including hosing him down and carefully cooling him with ice.”

Totti was still conscious when he was rushed for emergency veterinary care – unfortunately the damage from the heat was already done and the overheated dog could not be saved.

The situation remains under investigation. The handlers and other members of the DOC, are said to be “devastated” over Totti’s death.

On Friday, a working canine with the Alachua County Sheriff’s Office in Florida, perished after being forgotten in a patrol car for several hours. The six-year-old dog’s handler is said to be devastated over the loss of his canine partner.