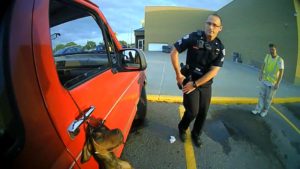 A small dog is alive today thanks to the efforts of officers with the Arkansas City Police Department in Kansas. On Monday, the police department released information about the rescue effort which saved the dog from dying in the parking lot of a Wal-mart store located at 2701 North Summit.

According to the department, officers were already at the store attending to a shoplifting situation when they were alerted to a dog in distress by a store employee. The department wrote, “Sergeant Legleiter and Officer Hammond were notified by a Wal-Mart worker that a dog was hanging by his leash outside of a truck. Sergeant Legleiter and Officer Hammond quickly responded to the nearby vehicle and saw that the dog had essentially hung himself from the leash.” 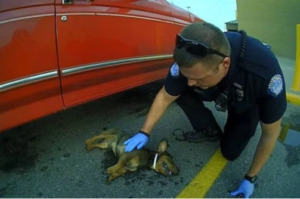 By the time the officers reached the dog, it already appeared to be too late – the dog was motionless and appeared to have died. Sergeant Legleiter used his duty knife to cut the dog’s leash and Officer Hammond began tending to the dog once he was on the ground. The department explained, “Officer Hammond helped the dog breathe by removing the constricting collar and applying pressure intermittently to the dog’s side. After several minutes had passed, the dog became more and more responsive and showed signs of life little by little. Eventually, the dog appeared to have fully recovered from the incident and was able to stand under his own power.”

According to NBCi 4 News, it will be up to the prosecutor to determine if the dog’s owners will face charges for the incident.