You are here: Home1 / News2 / animal cruelty3 / Starved dog gnawed off his own foot – owners are facing charges

A starved dog, who resorted to gnawing off his own foot after being left chained up, is on the road to recovery. His owners, identified as 32-year-old Jessica James, and 38-year-old Skylar Craft, are facing charges for his dismal condition. 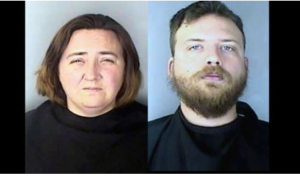 The Great Dane, Luke (formerly Lucifer) is in the care of Noah’s Arks Rescue – he has a long road to recovery. The rescue group wrote:

Poor Luke has got to be one of the saddest cases we have had in a long time.  All of the pups we save are sad and desperate but his reaches down into your Soul.

He is so starved that it is hard to believe he has the strength to take two steps.  He looks like a dog that is not going to live past the end of the day.   His eyes are sunken into the back of his eye socket.  His nasal cavity and eyes are infected and drain constantly.  I have seen a lot of sick dogs but what has happened to Luke is beyond inhumane.

Luke’s leg is badly infected and he will need to have it amputated. The rescue organization explained:

His infection appears to have invaded the bone, and that can cost him his Life.  We are not going to risk it which is why we have made this decision. He is strong enough to survive the surgery to remove the leg but not strong enough to withstand the infection if it continues up his leg.

Despite the horrific neglect Luke has suffered, he still loves people. The rescue group wrote:

we have discovered is he loves everyone and does not have a mean bone in his body.  He needed a place where he felt safe, and that is what he has with us.

Donations for Luke’s care can be made to the rescue group’s website.

Woman accused of killing dog in heinous act of cruelty