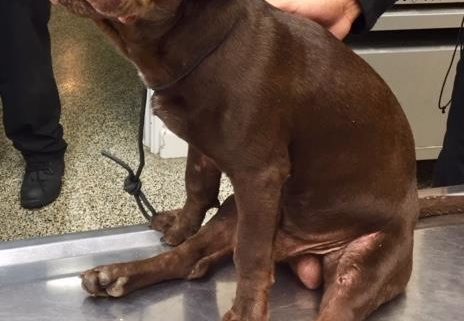 A homeless man is responsible for saving an injured dog, who was hit by a car in Jackson, Mississippi. On Monday, the Animal Rescue Foundation of MS (ARF) recounted how the dog was saved:

Last Friday afternoon, a homeless man witnessed a young dog being hit by a car on State Street here in Jackson. The driver kept going, so the homeless man scooped up the dog and carried him the whole way to the closest vet he could find. The vet called us and asked if we could help the dog.

The injured dog, dubbed Howard, will require a lengthy (and expensive) hospital stay – though helping him is beyond the capabilities of the rescue group, they are confident that donors will step up to get Howard the care that he needs. The rescue group wrote:

We have the greatest supporters and are hopeful in this month of Thanksgiving, that once again our supporters will help us help the voiceless and helpless.

Howard has a broken leg and an injured back – despite his pain, he is described as “very sweet and calm.”

If you are interested in helping Howard, you can make a donation by calling the vet directly at 601-366-1461 or to the rescue group’s PayPal at arfms@comcast.net.

Yesterday in the news: Woman accused of killing cats and starving dogs – the story here.

Deer hunter accidentally killed by another hunter on opening day

Update on Olivia: Abandoned and left to die on old mattress
Scroll to top