Mochi, a white Jindo, is a survivor. Last year, he was rescued from a dog meat farm in South Korea, and recently, he managed to survive 16 days alone in a desert along the Nevada/California border. According to CBS Sacramento, Mochi was on a road trip with his owners, Margaux Hansberry and boyfriend Jonathon Cline, when they made a stop in Primm.

The couple briefly left their vehicle, with a window down for air-circulation, when Mochi decided to make a run for it. A security guard reported seeing the dog “sprinting towards the desert.” For the next two weeks, the couple frantically searched the desert area…with drones and on all-terrain vehicles.

Social media posts about the missing dog were made and finally, there was a break in the mystery of the missing rescue dog – Mochi was spotted. After obtaining GPS coordinates of his the last place that he was seen, a trap was set. The hungry dog “took the bait” and was finally captured, after 16 days on the run.

Aside from losing some weight (approximately 10 pounds) and some wounds from his harness rubbing on his skin, Mochi was in good condition. Somehow, the resilient survivor managed to avoid predators and the elements for over two weeks.

Next: Passengers injured when carriage horse gets frightened

Recently in the news: Senior dog tortured after disappearing from family’s yard 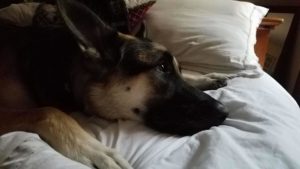 Dog found with carabiner hook and chain
Scroll to top