The director of an animal shelter in Tennessee found himself under fire following the circulation of damning starved dog photos on social media. According to WBIR News, 44-year-old Terry Wayne Starnes, who headed up the Friends Animal Shelter in Newport, was arrested early this week following an investigation.

The accusations of wrong-doing

In a press release, Cocke County sheriff Armando Fontes explained that a formal complaint was filed by Amy Huff, a concerned citizen, on November 30. Huff filed the complaint after observing a photo of a starved hound named Kylar. 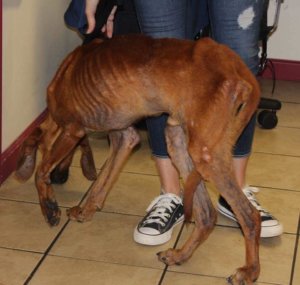 The concerning image had been posted to Facebook by April Clevenger on November 29 – she wrote:

please share!
location: Friends Animal Shelter
Cocke County
after reading this there should be no doubt why 25 animals were reported dead in their kennels in their October report!! mind blowing!
lack of proper care! these animals are suffering until their last breath!

Sheriff Fontes recounted what was found inside of the shelter:

As reported by KnoxNews, Kylar is now recuperating in a foster home. He is reported to be gaining weight – up to 54 pounds from a mere 31 pounds when he was rescued.

More: Young man died while trying to save dog from icy pond – the story here.

In need: Senior dog has a microchip, but nobody came to get him. Read more at this link.

Animal control surprise after call to pick up ‘dead’ dog