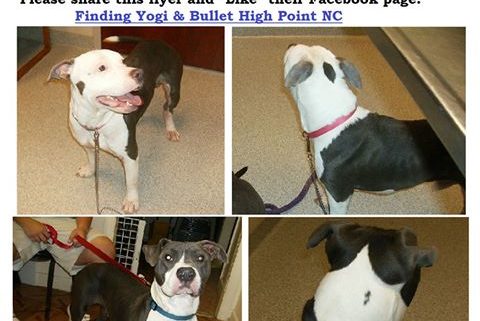 Every dog rescuer’s worst nightmare occurs when the dog or dogs they work so valiantly to rescue, end up in the wrong hands or worst case scenario, dead. Yogi and Bullet were two male pit bulls rescued from Lisa Lewis Hendren, a well-known North Carolina dog flipper after a suspicious house fire at her home on September 17, 2015. They, along with 4 other rescued dogs, were sent to boarding at a vet in Thomasville, NC for two weeks. All the dogs rescued were extremely undernourished, had skin issues, sores, and all were terrified. Due to the high cost of boarding, Angie Allred moved the dogs to her groomer Lauren Hardy of Kustom K9 Grooming in High Point for continued boarding.

Angie did a fundraiser to cover the food boarding and the required heartworm tests. On October 4, 2015, Lauren asked to adopt Bullet and said she knew of another family friend that was interested in adopting Yogi. On October 24, 2015, the dogs were adopted into their prospective new homes under the condition both dogs would be neutered within 30 days and proof submitted.  Neither Lauren nor Yogi’s new owner followed through with this.

Around mid-December 2015, things began to unravel when Lauren stated her dog Tucker was not getting along with Bullet, and the family that adopted Yogi could no longer keep him either.  Yogi was brought back to Lauren, but when Angie Allred asked for updated photos of both dogs for a Facebook page, only photos of Yogi were supplied; none of Bullet who should have still been residing with Lauren Hardy were included. And, Lauren never made mention of the need to get Bullet re-homed.

On January 3, 2016 Angie was taking another dog to Lauren for boarding and asked to see Yogi and Bullet while she was there. Lauren stated they were spending the day with her brother. When Angie asked again about seeing the dogs on January 5 she was given the same story – that the dogs were with her brother. Then on January 7, 2016 a Facebook post stated Yogi and Bullet had been re-homed. This was all done without Angie’s knowledge or approval.  And to further add to the suspicion already surrounding the whereabouts of Yogi and Bullet, it was discovered that Lauren gave the dogs to a female named Elisha LeBaron Carranza on December 27 2015, yet lied to Angie on January 3 and 5 saying the dogs were with her brother. She did not divulge the name of the woman she gave the dogs to until February 9; almost two months after the dogs were out of her custody.  She gave Angie Elisha’s address on Wayne Avenue in High Point, NC but advised she did not have a home phone to call.

Angie could contact Elisha by phone at her work place. Elisha assured Angie that she had an appointment to have the dogs neutered the following week; gave an email address to send the adoption applications to and agreed to a home inspection. By February 25, Elisha still had not sent in the adoption applications for both Yogi and Bullet nor had she arranged the home inspection. When Angie messaged Elisha on Facebook she alleged she came home after being out of town for five days and found her back door open and both dogs missing. However, no police report was filed to corroborate this story nor was animal control called to see if the dogs were there.

A message from two witnesses gave the indication that something more sinister had happened to Yogi and Bullet, and Elisha invented the burglary lie to cover it up.The two witnesses Megan Justus and her boyfriend Jacob Ryan Oldaker, stated both dogs were found dead in Elisha’s home in late January 2016; cause of death unknown and both dogs were cremated in a bonfire. Elisha denies these allegations and thinks her ex-boyfriend Todd Gainey is involved in their disappearance. Todd Gainey refuted this by saying he had seen the dogs in Jacob’s vehicle and that Elisha and Jacob were romantically involved.

The plot becomes even more murky when Animal Control Officer Holly Lackey went to Elisha’s home on February 25, 2016 to see if Yogi and Bullet were still on the property. She advised Angie she had seized four dogs from the Wayne Avenue address due to animal cruelty sometime between December 2015 and January 2016, but none of the animals seized were Yogi and Bullet. One of the dogs removed from the property was an emaciated pit bull and another dog that had almost hung itself on a leash.

Something  is going on at Elisha’s property. Animals are allegedly being abused, sold and possibly killed. And to add to the mystery, Elisha LeBaron Carranza and those that claim to know the whereabouts of Yogi and Bullet all have criminal records. Per one of Elisha’s arresting officers, Officer Plount there is a strong likelihood Elisha sold the dogs for profit as she has had many charges of larceny in the past. Disturbed by this news and worried about the welfare of Yogi and Bullet, Angie Allred solicited the assistance of High Point Police Department and Animal Control; none of whom are willing to help find Yogi and Bullet.

“I appreciate your concern for these two dogs.  Certainly if we could prove that the owner neglected them or was cruel to them in violation of the law, we would rush to charge her.  But we would be required to prove the neglect and cruelty in court beyond any reasonable doubt. Unfortunately, based on the information provided to me by ACO Holly Lackey, we do not have nearly enough evidence to make a charge and no leads that have not already been followed up on.”

Since Yogi and Bullet disappeared Angie has been running into brick walks trying to get assistance from law enforcement and animal control but to no avail. Lauren Hardy is refusing to cooperate with Angie by telling her the whereabouts of the dogs, and it has been alleged that Lauren may have profited from the sale of the dogs.  Why would a person who works with animals at her own business Kustom K9 Grooming willingly give two dogs who have already been abused to a known criminal? It does not make any sense.

Angie Allred just wants the dogs back safe, and has even offered a reward for their return with no questions asked. For updates on Yogi and Bullet and if you have any information on their whereabouts please visit their Facebook page: