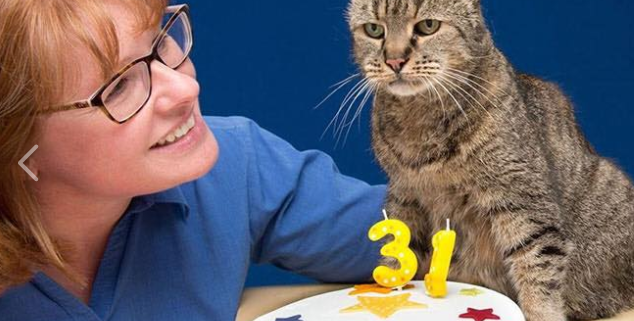 A cat, believed to be the oldest in the world, has died. According to People Pets, Nutmeg made it to an impressive…make that incredible, 32 years of age before passing away.

The elderly feline had lived with Liz and Ian Finlay for the past 27 years – Nutmeg was a stray who kept following the Finlay’s other cat (Spice) home. After deciding to keep Nutmeg, a veterinarian who examined him placed his age at five years (based on his teeth).

In June 2016, Westway Veterinary Group posted a Facebook photo of the senior tabby cat, and noted that he was “still going strong” even after suffering a stroke:

Meet Nutmeg, who’s still going strong at the ripe old age of 31 – thanks to Westway Vets. The moggy marvel underwent lifesaving treatment after suffering a seizure 12 months ago.

Mrs. Finlay told the Mirror U.K. her thoughts about her cat’s secret to life:

He is not our cat, we are his humans and he never lets us forget that. Maybe that is the secret to his long and happy life.”