You are here: Home1 / News2 / animal cruelty3 / Woman rescued dog bound and left to die on side of road 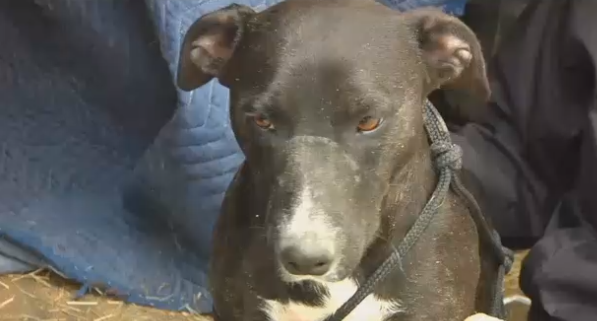 A Texas woman’s heart broke this week when she saw a stray dog who had been bound in tape and left to die alongside a road in Grayson County. According to KFOR News, Denise Stokes found the black mixed-breed dog on Wednesday – she described the cruel manner in which the dog had been secured:

“I found her and saw her laying on the ground, and her back legs were still duct-taped. The tape around her mouth and front legs had already been removed, but she couldn’t walk because they were crisscrossed together, taped up.”

The dog, dubbed Sweetie, is a stray known to Stokes. In the not-too-distant past, the dog appeared to have delivered puppies and Stokes had brought her food. She opted not to take Sweetie home at the time because she hadn’t located her puppies.

But this week, after finding the cruel manner which Sweetie had been tied up, Stokes decided to take her home and keep her until a rescue group is able to take the homeless dog in. Stokes wants to ensure that Sweetie is fixed and given her shots and then, adopted to a loving home. She said, “I want her to have love, I want her to be happy, and I want her to make somebody happy, because I know she will.”

The Grayson County authorities are investigating the animal cruelty case.