You are here: Home1 / News2 / Dogs3 / dog news4 / Three dogs deemed dangerous after attacking kid who jumped into their ... 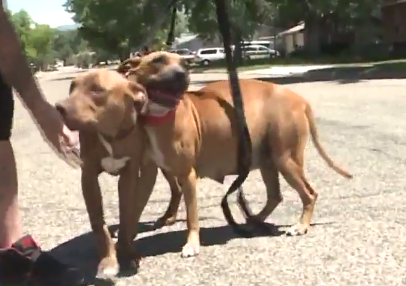 A Utah family’s three dogs have been seized, placed into quarantine and deemed “dangerous” because they attacked a kid who jumped over a fence and into their yard. Lindsay Long, mother of the eight-year-old boy who hopped the fence to retrieve a wayward ball, told Fox 61 News that she is upset that the three dogs aren’t being punished further, she stated:

“[My son] went through so much trauma, and the fact that these animals are allowed to just stay there and are basically off the hook for attacking my son,”

Animal lovers have taken offense with Long’s viewpoint on the situation – after all, it was her child who jumped into a fenced yard, without permission. The dogs, who belong to Long’s neighbors, reacted to an intruder as most dogs would…they were protective and attacked.

The dogs’ owner will have to construct a six-foot kennel to keep the three dogs in whenever they are outside, and the dogs will now have to wear muzzles if they aren’t in the house, or in the kennel. Long doesn’t feel like that is enough.

Feel free to weigh in – what, if any, punishment would be suitable in this situation?

Stray dogs turned out to be best friends – read what happened next here.

Teenager observed swinging dog by the neck with a leash