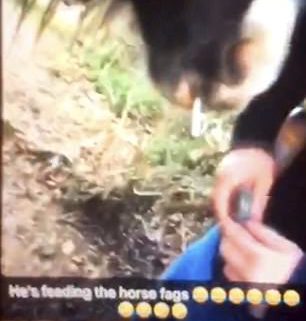 On Tuesday, a group of teens uploaded video to Snapchat showing a horse being fed cigarettes. According to the Daily Mail, the horse’s owners have seen the disturbing video and they claim this isn’t the first time that the thugs have abused their farm animals.

The horse’s owner,  Moya Hayward, and her son Josh Cummings, claim that this type of cruel behavior has been happening for several years. Howard claims that the teens have chased the horses and they have thrown rocks and bottles at them. The farm has several types of animals, but the horses seem to take the brunt of the abuse by the gang of teens.

The owners were able to obtain the video proof from the most recent incident and they have approached the Surrey Police to lodge a formal complaint – what, if anything, will be done remains to be seen.

Please feel free to share your comments below – how should this situation be handled? Do you think that the authorities will take action, or write the kids’ behavior off to them “just being teens?”

Owners tie dog’s neck and legs with rope while dragging her into shel...