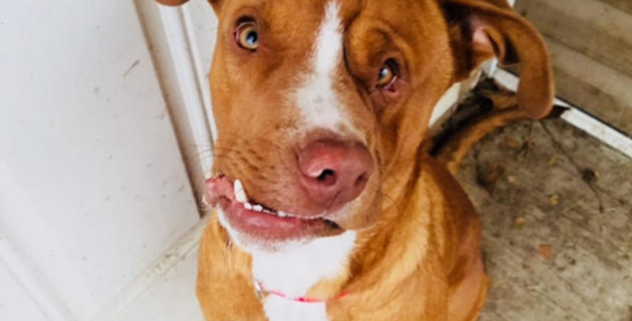 A rescue group in New York set out to find the perfect home for a special dog who wound up in its care. The dog, a young pit bull named Woody, has a crooked face, and a fun-loving personality. Not long ago, Woody was taken under the wing of Special Needs Animal Rescue & Rehabilitation (SNARR) Northeast and as soon as the agency shared the puppy’s photos, and his story, the adoption applications began to pour in.

According to SNARR, Woody’s face is crooked because he was attacked by another dog when he was just a young pup – he didn’t receive any veterinary care and his face healed in such a way that he just “looks a bit different.” Despite his unusual appearance, Woody doesn’t suffer from any health issues – he’s just a typical goofy, friendly pit bull puppy.

In mid-November, the rescue group described the perfect home for young Woody:

Woody, while adorable, needs some love and a bit of training, he is a bit jumpy, but who wouldn’t be after being chained up outside! He also needs a home without cats, he likes to chase them.

And admitted that they were being “picky” when it came to finding Woody’s ideal family. According to Woody’s current Petfinder biography – the perfect home has been chosen. One of the best words in the rescue world is “adopted” and that’s exactly what Woody’s biography states – Adopted.

Have a great life Woody!

This week in the news: Wildlife officials seize family’s pet raccoon, raised from the time she was a newborn
Recently in the news: Kind man rescues wild bunny from raging wildfire – caught on video