You are here: Home1 / News2 / animal cruelty3 / With profound sadness, death of neglected horse is announced 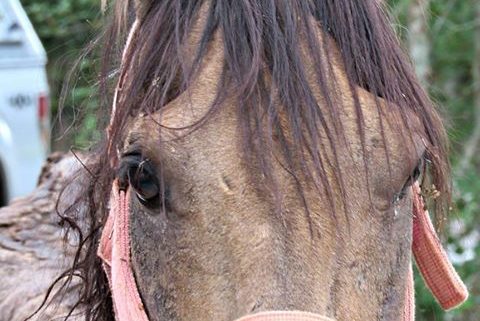 On Thursday afternoon, the Humane Society of Louisiana announced the passing of a severely neglected horse who was recently rescued from deplorable conditions in Ascension Parish. The animal welfare agency let its Facebook followers know that the horse, named “Miraj,” had died.

It is with the heaviest of hearts and profound sadness that we must report that sweet Miraj has died.

Miraj had fought long and hard to survive, despite the cruel neglect he endured, but the toll of being denied the most basic of care had already taken its toll. Those who grew to love and care for the beleaguered horse took comfort in the fact the Miraj was surrounded by those who cared for him in the end.

The shelter described how the decision was made to let Miraj go:

Our Shelter Manager, Jessica Cameron, was with him at the vet hospital in his final moments. Within a half an hour, he went from being responsive to unresponsive, at which time, all were in agreement with the decision to euthanize him, as his breathing began to be labored.

According to the shelter, Miraj will be buried under trees at the veterinary hospital’s beautiful property, where he quickly became beloved of the staff and caregivers.

A man has been arrested in this sickening case of cruelty – according to the Humane Society, 32-year-old Kenneth D. Corley was arrested on Tuesday. Prior article about this sad case here.

Reward of $6,200 for information on emaciated dogs found in Darby

Man who hurled his dog off East L.A. cliff sentenced to five years in priso...
Scroll to top