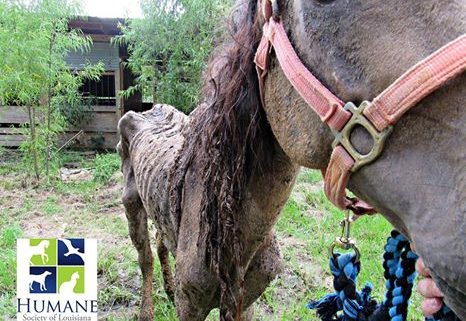 A skeletal horse, starved to the very brink of death, is fighting for his life after a deplorable situation was discovered in Ascension Parish, Louisiana. On Wednesday, the Humane Society of Louisiana issued a release about the severely neglected horse, named “Miraj,” who was rescued this week.

The 7 year old buckskin stud was in absolutely deplorable condition. Skin and bones, he was also housed and standing in incredible filth. Once the stall door was opened, the long-suffering animal was able to walk out and was eager for affection.

Miraj survived the night and at last report was still comfortable and eating some hay. We hope that this wonderful horse gets the chance he deserves at a happy life.

A man has been arrested in this sickening case of cruelty – according to the Humane Society, 32-year-old Kenneth D. Corley was arrested on Tuesday.

According to the shelter, Miraj is fighting for his life at Kleinpeter Equine Veterinary Services. He is in very guarded condition and the next 72 hours will be critical.

Donations for this victim of blatant cruelty can be made here.

Homeowner arrested after he shot doe and her fawn for eating his garden pla...
Scroll to top