Authorities in Indiana are searching for the person who committed an unspeakable act of cruelty to an injured deer. According to Friday’s WTHR News, someone struck a deer near State Road 25 and County Road 400 North near Rochester on February 16.

The person who hit the deer did not offer any form of compassion to the wounded animal – instead, they doused the deer in accelerant and set him on fire. The deer, wounded and burning, did not die immediately – sadly, a passerby later came upon the horrifying situation and contacted the Fulton County Sheriff’s Department because the wounded animal was still alive…smoldering and suffering.

Ultimately, the deer was put down – relieved from excruciating pain. Now, the search is on for the driver who committed the cruel act. According to the authorities, based on parts of the car which were found at the scene, the person is believed to have been driving a dark colored vehicle, possibly a Trans-Am, Firebird or Camaro (model years 1992-2002).

Anyone with information about this act of heinous cruelty is asked to call the Fulton County Crime Stoppers at 1-574-223-7867 or the Indiana Conservation Officers’ “Turn in a Poacher” line at 1-800-TIP-IDNR.

Dog has been waiting in boarding for over 650 days – read more about how you can help here. 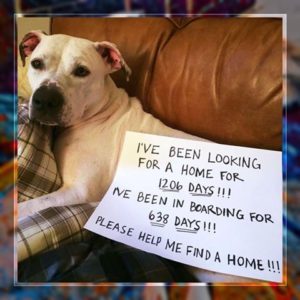 Abandoned ‘pink dalmatian’ and his buddy left in shelter’s...
Scroll to top